A photocopy or diagram of the rock formation with the proposed route drawn in and a picture of the area at the base of the climb are required to be submitted with this application.

The Der Freischutz formation on Dinosaur Mountain has about 10 documented routes ranging in difficulty from 3rd class scrambles to 5.13+ sport routes.  The North West end of the formation is home to The Horn 5.13+, which is all bolt protected.  The West face has the routes Bidoigt (Sex) 5.10a, Drugs 5.11b, and Rock & Roll 5.10d that have mixed protection with bolts and gear.  There are two more routes on the west face pretty far down the hill, Sidewalk Stroll 5.11a and Lucy and Devi Go Mousing 5.11b, both with 4 bolts each and requiring some traditional gear.   The proposed route is about 50 feet right of Rock & Roll and 100 yards left of the two routes down the hill.

To approach Der Freischutz: Follow the Mallory Cave Trail past Dinosaur Rock.  The trail will pass under the East face of Der Freischutz before heading North.  When the trail reaches the East face of the Hand take a left on a well defined climber access trail.  Follow this uphill along the South face of the Hand.  Once you pass the routes Back in Slacks and Power Bulge, bear left.  The route The Horn should be visible.

The proposed route starts about 40 feet right of Rock & Roll, and a short distance down the hill to the South.  From the NW corner of the formation follow the climbers trail down the gully toward the start of Sidewalk Stroll.  The trail leads around the west side of a giant boulder that is attached at its North end.  Step left (East) around the base of this boulder to reach the start.  I hardly set foot on any soil during this approach.  You can make your way down by stepping on big solid boulders.  The staging area is nice and flat, and on solid rock

Lowering or rapping  95 feet from the anchor will land you back at the staging area.

The staging area at the base of this route is almost too good to be true.  It is very flat and consists of solid rock.

Has all reconnaissance work that can be reasonably done, short of placing any hardware, been done? Has the route been top roped?  Is there loose rock?  Is it extremely overhanging?

All reconnaissance has been done and the route has been top-roped.  There is no loose rock or cleaning required.  It would take about 8 protection bolts and two anchor bolts.  Lowering with a 60m rope will reach back to the staging area.  The proposed new route goes straight up a beautiful face for 40 feet to a ledge, about 15 feet of easier climbing up the ledge lead to an overhang.  Once over the overhang, a rising traverse left leads to a rounded arête to the top.  There is no natural protection on the route except on the ledge.  One gear placement in this section could protect the run-out from the bolts on the lower half until you clipped the first bolt on the top half.

This route is really fun and longer than any of the other west face routes.  The climbing is clean and continuous (except a short easy section in the middle).  The upper half reminds me of Velvet Elvis, with the rising traverse on classic pebbles and knobs except this route is only 5.9.  I think it would become very popular. 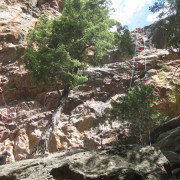 The Handy Warm-up Proposal on the Hand
Scroll to top