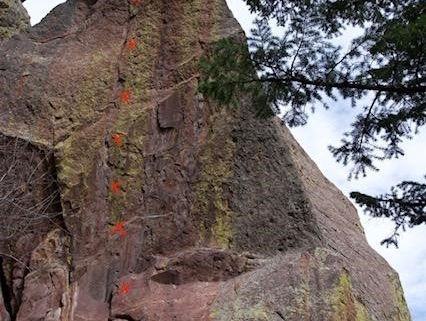 Number of bolts to be placed: Total of 12 bolts
Ten bolts plus two anchor bolts

This route takes a striking, direct line up solid rock on the center of the steep overhang on the featured West face of Stonehenge. This is up the hill from the creek, to the left of The Sculpture and Auspice.

There are ten existing routes on Stonehenge (10) (sport + mixed + trad). Get Lanced will be between Stonehenge Mix Route and the Sculpture.  Due to the unique shape of this feature, it is difficult to provide a diagram of the existing routes that would be helpful. Current Flatirons guidebooks don’t do it justice either. All routes are at least 10 feet apart, Get Lanced stands alone and isn’t close to any existing routes

Measure for Measure 5.10b R Trad

The approach to Stonehenge is well established.

Hike up the Bear Canyon Trail for about 30-45 minutes, passing the new Xcel power lines established just below Overhang rock. Continue on Bear Canyon Trail past the climber’s trail for Overhang Rock and just before the trail crosses the creek take an obvious right turn on a slab descent to approach Stonehenge. Cross the creek at some boulders and go slightly uphill to reach the base of the formation close to the Fiend. At this point walk down the hill to the alcove where Get Lanced is located.  The surface at the base is very durable, primarily rock, with plenty of room to belay.

The descent from the proposed route is to lower (or rappel) from the top and land back at the belay. Reversing the approach to return to the NCAR parking lot.

Soil is compact and base is flat and rocky, ideal for belaying. Clean and clear. See image above with backpack for scale.

Yes. Minor cleaning and multiple days of inspection and TR climbing has been done.

The route has been top roped, minimal loose rock, it is about 30 degrees overhanging for 70% of the route.

This should be a great addition, with some fun technical vertical climbing at the bottom, followed by sustained steep and physical movement on good edges, with a powerful move guarding the anchors at the pinnacle of the formation. Difficulty will be in the 5.13 range.