Route Description: The proposed route starts to the right of the first belay on The Perfect Storm (traversing across a broad ledge). The first 15 meters climb through beautiful yellow streaks on the wall with good edges and face climbing. The route in this section is continuous and interesting with a difficult boulder problem before a break (~5.13).

The route then reaches a shallow corner where it would be possible to climb straight up to the Nattiq anchor at ~5.10. However, the proposed route continues left and up through overhanging rock between Nattiq and The Perfect Storm (staying well clear of both routes) for another 15 meters. The climbing in this section is also continuous, with the most difficult climbing (~5.13) in an overhanging scoop that is reached by trending slightly left up the wall.

The route will end with an anchor after the difficulties and about 20 feet below the summit. It would be possible to run the route to the top of the wall and to the right of The Perfect Storm. However, the rock quality and climbing difficulty would be much lower in this section compared to the rest of the route. Also, it would make it very difficult to get back to the pitch one belay. 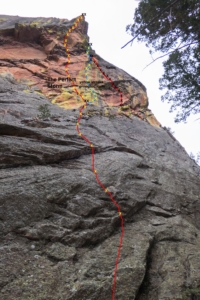 Description of Neighboring/Existing Routes: The North Face of Seal Rock has 6 existing routes.

2. The Hinge: a 13a sport route that shares the first pitch of Yellow Door, then climbs straight up a line of bolts from the belay to through the vertical face to anchors at the lip.

3. Sea of Joy: a three-pitch route that starts about 100’ right of Yellow Door. It is rated 13a and is mostly bolted, but takes some gear on the first pitch.

5. The Perfect Storm: A 2 pitch 13b sport route. The proposed route would share the first pitch of this route, as well as the last two bolts of the second pitch.

6. Nattiq: This 2 pitch route awaits a first assent, but is reported to be 5.12 and is mostly bolted. 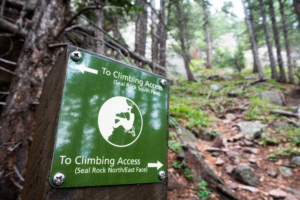 Descent Description: The descent is via lowering off the route back to the staging area.

Base Area Description: The staging area at the base is the same as for The Perfect Storm since it shares the same first pitch.  It is compact dirt and rock, with no pre-existing vegetation. 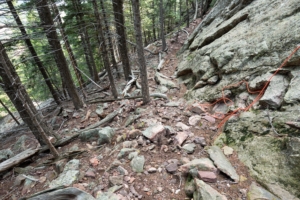 The route has been top-roped as much as possible using the upper bolts of The Perfect Storm, as well as strategically placed stoppers to the left of and above the Nattiq anchor.  The route is too steep to top-rope in its entirety without fixed gear.  There is no loose rock apparent.

Additional Notes from the Authors: The team submitting this application has spent a significant amount of time assessing the optimal line on this section of the wall, and we are really excited about the resulting proposal.

Join Us for the 20th Annual Flagstaff Trash Bash

Flagstaff Trash Bash is Two Weeks Out!
Scroll to top