Route Description: Seal of Approval takes the consistently overhanging face/scoop between Choose Life, to its right, and I Am the Walrus to its left, on the south face of Seal Rock. It begins by climbing blocky, overhanging rock into a right-trending undercling feature along a small roof at 25 feet. Above this, the route moves up an incipient corner then along an ever-steepening scooped face to another crux bulge, then goes into a large right-facing crack feature at 70 feet for a brief rest. The estimated difficulty from the ground to here is 5.13-. From the crack to the top of the wall, the route climbs consistently difficult terrain on small holds (sloping pockets and small edges) up black- and green-streaked rock in the large scoop/bowl, finishing up along an extruded tufa feature in a final crux bulge. The anchors will be up and left of this bulge at the lip of the wall, to facilitate smooth lowering and minimize wear on the rope. The estimated difficulty of the upper section is 5.13+, for an overall route difficulty of 5.14-. 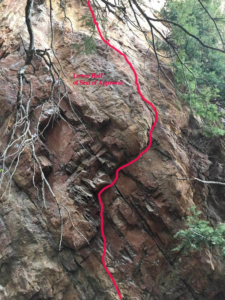 Description of Neighboring/Existing Routes: The south face of Seal Rock has eight existing sport climbs. From right to left, they are: Jade Gate (5.11), Skin Flute (5.12), The Gruffalo (5.11-), Primate (5.13), Thunder Muscle (5.13+), Choose Life (5.13+), I Am the Walrus (5.14-), and Super Tuscan (5.13). The proposed climb, Seal of Approval, would be in between Choose Life and I Am the Walrus, 10 feet to either side of each route, with no shared holds or bolts or anchors. It is impossible to show the entire south face due to it being in a gully full of trees, but below is a photo of the specific part of the wall with the proposed climb and its neighbors. 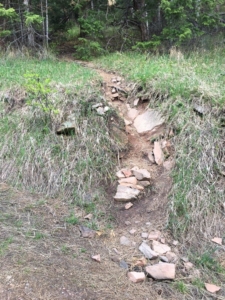 Base Area Description: The staging area at the base is compact dirt and gravel, with no pre-existing vegetation (it’s under a very overhanging part of the wall, in the rain shadow) 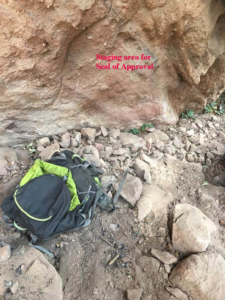 Description of Route Evaluation Efforts: The route has been inspected on a fixed line hung off the lip, which let us stay in close and inspect it from bottom to top. Because there is no directional gear and because of the steep angle and proximity of large trees behind the wall, it is unsafe to toprope or to try the moves until directional bolts have been placed.

The route in its entirety has not been toproped due to the constraints listed above and will only be safe to toprope once top anchors and at least a handful of directional bolts—removable or otherwise—have been placed to stay into the wall, to obviate the hazard of a perilous swing into trees behind the route, given its very overhanging angle. A few friable flakes will need to be removed at the 30-foot mark, but otherwise the rock looks solid, with a hardened varnish/veneer to it.

Additional Notes from the Authors: This route will be another long, technical, difficult addition to the south face of Seal Rock, on solid stone and at a consistent angle, with memorably difficult climbing on its upper third to a logical stopping point at the lip of the wall.