Skin Flute (5.12a/b): FA: Matt Samet, Peter Mortimer, Zach Barr (toprope/trad) first bolted ascent: Paul Glover, Steve Annecone, Mark Roth
This is a a bolted route on the south face of Seal Rock — it’s the first route you come to along the South Face and is the farthest east on the wall at present bolted. You’ll find eight bolts to a double-bolt anchor at the lip.

This route is about 100 feet up the south face as you head west along the gully. It climbs the green wall in the heavily forested area and is about 60 feet tall. Look for an obvious, ribbed, flute-like feature up near the top, where you find an elegant crux.

This was originally (2002) done as a toproped, rehearsed “trad” lead (headpoint-style) but is now (2015) a safe and logical and excellent 8-bolt sport climb.

Eight bolts to a double-bolt anchor.

In its former trad state (preserved for historical info only): RPs, #00 Metolius TCU, stoppers, two 1″ pieces, and one 3″ piece. 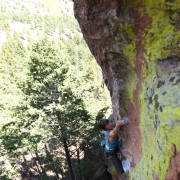 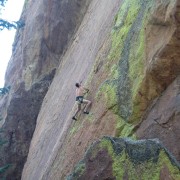 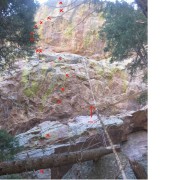 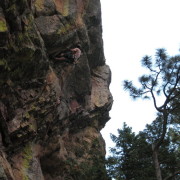 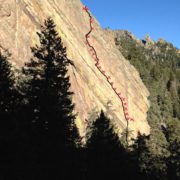 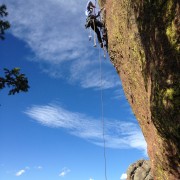 Box of Rain
Scroll to top