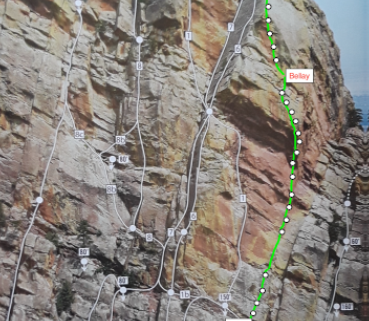 Number of bolts to be placed: 27 bolts

The route is approached by climbing the first two pitches of Captain Beyond (5.10a, 5.9+). Use of a natural protection belay is proposed at the big broken ledge system, at the base of the new climbing.

The line starts up a smooth face just above and left of where Captain Beyond joins the large ledge system. Bolts are proposed to protect this slab feature. A crack system extends beyond the slab, and some medium to small traditional gear would protect about 30 feet of the crack/corner system. The crack then seams out, and more bolts would be required where the line begins transitioning to a steep arete. This long pitch continues up the overhanging arete feature that defines the right edge of the massive roof two-thirds of the way up the south face of Middle Tower. The line then trends up and left across a steep face, and a 2-bolt belay is proposed at the end of the pitch on a large ledge. This first pitch is 150 feet long, will require 17 bolts, and is 5.12.

The second pitch heads up a steep, lichen-streaked face past several bolts to the prominent arete just right of Perversion and Vergin’ on Perversion, following more bolts to the summit. This last pitch is 5.12, employs 8 bolts, and is 90 feet long. A 2-bolt belay anchor is recommended at or near the usual Perversion top-out spot on the summit.  The route overall is steep and exposed and with scenic position, and it is nowhere near any other known routes, once leaving the Captain Beyond ledge.

Culp’s Fault (5.8+) is located about 15 feet right (downhill) of the start of Captain Beyond (5.10c, trad, 4 pitches). As indicated above, the proposed route starts on a big ledge system after climbing the first two pitches of Captain Beyond. Continuing downhill to the right are Amusing (5.8+ R trad), Three Musketeers (5.11c sport), Mighty Mouse (5.12a sport), and Simian’s Way (5.11b trad). More routes exist on the South Tower further downhill of these routes.

The approach is the same as that for any of the Mickey Mouse routes. We prefer parking at Eldorado State Park near the Bastille formation, hiking up the Bastille West Face trail to the Fowler Trail, and then take a left turn. Follow the Fowler trail to the Goshawk trail and go right. After about 0.75 miles, the Mickey Mouse access trail forks off right from the Goshawk trail. Follow this trail to just below the train tracks, and then follow a thin trail on the hillside left of the tunnel entrance. Cross the tracks just south of the south end of the tunnel, and head up the trail that skirts the base of Mickey Mouse. The total approach time is 1 hour for fit parties moving quickly, or perhaps 1.5 hours for most parties. The trail surfaces are mostly packed dirt, rocks, and talus in places, especially near the base of the cliff.  There are a few other options from different trailheads.

The descent involves rappelling from the standard Middle Tower descent rappels. First traverse from the route top out, near the Middle Tower summit, to the west and down to the start of the rappels. Three rappels using either a 60 or 70 meter rope gets one down to the ground. From the ground, collect your stuff and reverse the approach trail.

The staging area at the base of the climb is the same as that used by parties on the popular Captain Beyond route. It is composed of rocks and dirt, with a few small shrubs (Oregon grape) on the edges.  (see above photo).

Yes, most of the route has been top roped clean. However, the steep arete and one other portion on the second pitch was too overhanging and/or directional gear was too limited to climb these portions entirely clean. However, holds are present and the climbing should be in the 5.12 range.

Yes, the line has been mostly top-roped.  The rock is relatively clean, and some minor cleaning of loose flakes has been completed in the scoping process. The crux arete is moderately overhanging, perhaps 20 degrees.

The proposed route takes an aesthetic and direct line to the top of the Middle Tower. Because of the length of the pitches, this new line relies on the existing Middle Tower rappels for descent, as few climbers are willing to carry two ropes for descending when other options are available. The line is far from any existing routes for most of its length, and should be a nice new addition to this formation.