There are numerous routes on the Third Flatiron ranging from historic traditional lines with scant natural protection to bolt intensive lines up more difficult terrain. The proposed route is on the large, untracked Friday’s Folly Wall (west end of the south face of the Third Flatiron). It is well separated from two traditional lines: Friday’s Folly (5.7) to the left and Pentaprance (5.10+) to the right. The proposed route is a 90’ sport route, starting at the lowest point of the wall and ending at a double bolt anchor about 30’ below the Friday’s Folly rappel bolt/ledge. The climbing is continuously interesting at 5.9 and 5.10, with a short 5.11- crux just below the anchors. 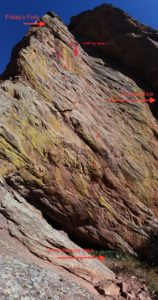 The approach takes the standard Third Flatiron descent trail to the notch at the west end of the Flatiron, followed by a short descent to the base of the wall on the route that accesses the routes on the south face of the Third Flatiron. The entire trail is well established and has a durable surface.

The descent uses the same trail as the approach.

The route has undoubtedly been top-roped several times over the past 30 years. It has also been top-roped recently by the applicants to determine the location of the bolts. The rock is solid; it is slightly overhanging only for the first 10’.

We debated whether to extend the route another 30’ to the Friday’s Folly ledge. Doing so would require a 70 m rope for lowering and would also entail considerable rope drag. Note that a double bolt anchor 30’ below the Friday’s Folly ledge would provide another descent route from the summit of the Third Flatiron (three rappels) that could be done with a single 60 m rope. This option could alleviate traffic jams on the descent.