1. A photocopy or diagram of the rock formation with the proposed route drawn in;

The proposed route, Hell in a Bucket, is located on the far right (east) end of the south face of the red Devil.  It is a steep and juggy route that is about 60 feet long. It includes fairly sustained climbing in a couple of spots. In addition to 9 proposed bolt placements, there is supplemental gear that is useful above the proposed first bolt, and between bolts 3 and 4. 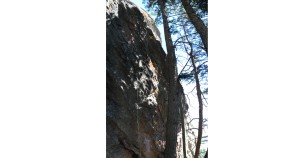 2. A description of existing routes on the same face of the rock formation, including the number of routes, route names, route grade, type [traditional or bolted], and approximate distance between routes (a photocopy or diagram of the existing route(s) is also required);

The Red Devil has three routes located on the south face, and two routes on the east face.  Hell Freezes Over (12a bolted), South Face (5.4 trad), and Paradise Lost (5.8+ bolted) are located on the south face from left to right (west to east) as one views the south face.  The proposed Hell in a Bucket starts downhill about 100 feet to the right (east) of Paradise Lost. The routes East Face Right (5.5) and Berserker (5.6) are both trad routes located around the corner and start well downhill of the proposed route.

The standard Mallory Cave trail is used for the approach.  Just before the cave entrance is reached, branch right along the continuation trail up to Red Devil and the Box.  One switch back corner in the trail is directly below the start of Paradise Lost; go there, then skirt the base of the rock formation east to the beginning of Hell in a Bucket.  This path along the base is mostly large rocks to be scrambled over.

From the top of the route, one could head north and continue with the route Berserker, going to the summit.  Alternately, one could rappel from a new two-bolt anchor.

The base is largely dirt and rock, with some low shrubs.  Large coniferous trees are present to the south of the staging area that shade the area well and also obscure the view of this area from the nearby trail.

Yes, the route has been climbed free at 5.11 using a top rope.

Yes, the route has been top roped.  There is no loose rock present.  It is vertical to mildly overhanging.

This is a fun route that will fill out the area and provide a moderate challenge for climbers that frequent this area.