Route Name: North Side of the Sky

Number of bolts to be placed: Total of 28 bolts

The proposed route begins on the ground, mid-way along the center of the North Face, at a distinct off width crack formed by a large flake. The entire route is an independent line, from base to summit.

The first pitch is approximately 105 feet. It starts off with two bolts of 5.8 climbing through a wide-crack, before a featured and short bulge. Passing this bulge into the dark slab above is the distinct crux on the route (mid-5.11). The rock in this section is solid, and the route follows intricate features on bullet dark stone. Following the crux, the route meets up with an angling strata that continues up and right, along the diagonal features. This section is enjoyable 5.9 – 5.10 climbing. After the angling strata, the route follows giant huecos up to the mid-way tree on the Direct North Face (P1 anchor). We suggest an independent 2-bolt anchor adjacent to the tree, to minimize climbers’ impacts on this lone tree. 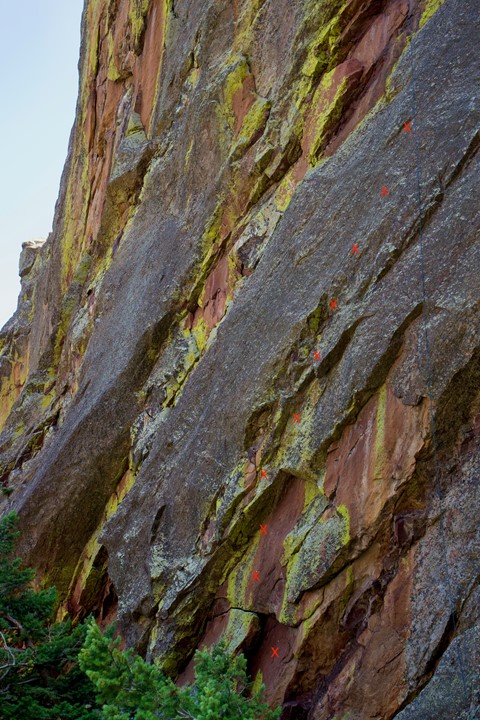 Pitch 2 is approximately 90 feet and leads off directly above the tree, and to the right of “Thanatos.” It follows the steepening wall above across diagonal strata-features. The crux is continuous, thin, intricate face climbing over two bulges (5.11a) that leads to the summit area. The position and climbing on this pitch is spectacular, with the West Overhang looming 20 meters off to the climber’s right, and the Boulder skyline off to the left.

The Northerly aspects of the Maiden has 6 existing routes, listed below left to right (East to West):

There are two options for descending the route: 1) the standard rappel down the West Overhang to the Crow’s Nest. 2) The route itself can be descended in 2 rappels with a 70-meter rope. The descent on trail is identical to the approach.

The base of the climb is a stable, durable surface of talus and dry rock. No pre-existing vegetation or sections of soil, other than large, mature ponderosa trees and some deadfall.

Yes. The route has been free-climbed in its entirety, with approximate bolt-locations marked.

Yes, the route has been climbed in its entirety on top-rope. There is the usual Flatirons “flaky” rock and some lichen that will be cleaned more thoroughly.

The proposed route will be a high-quality addition that rounds out other climbing in the area. The two proposed anchors would also enable an independent descent that would ease potential congestion on the standard west overhang rappel. It also allows a descent back to the north face which will reduce erosion from people rapping the west overhang then south face, and then having to hike back around to the north to retrieve gear.