Route Description:This route starts about 30 feet right of In God We Trust 5.10.  The first 10 feet is a shared start with the existing route Who Who? 5.7 (previously unreported in a guide book).  The first bolt will be far away from where the routes diverge and won’t affect the existing climb.  After the initial approach slabs, bolts will protect steep and interesting rock.  There is a gear placement between bolts 3 and 4, but it will probably feel optional to people competent at the grade.  The upper half of the route angles left toward a beautiful arête.  A mid 5.10 crux is encountered along the way.  Easier moves on the arête will lead to an anchor.  This anchor could be easily reached from above if wanted (with a belay preferably).  This anchor would also help stop the appearance of slings on the trees to the South. 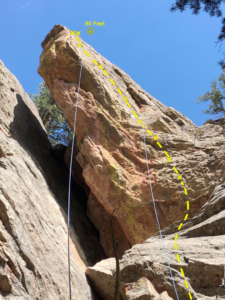 A description of existing routes on the same face of the rock formation, including the number of routes, route names, route grade, type [traditional or bolted], and approximate distance between routes (a photocopy or diagram of the existing route(s) is also required);Ridge One is home to about 20 routes. The classic Stairway to Heaven 5.3 follows the SE ridge all the way from the creek bed to the summit of Heaven pinnacle just west of Hillbilly Rock. The Guardian 5.12d, a 4 bolt sport climb, hangs over the creek on the South face. The remaining routes are all along the 1000foot long West face. From bottom to top the routes include: 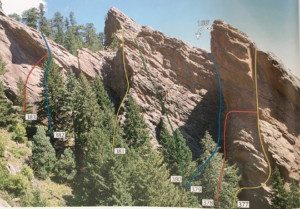 A description of the approach (include approximate distance from the designated trail system, existing “social” or undesignated trails leading to the climb and condition of the trail, and state whether there is a durable surface, such as rock. Include photographs of the approach.);Approach from NCAR. Pass the water tower toward the Mesa Trail. Turn right onto the Mesa Trail and head North. Follow the Mesa Trail until you cross Skunk Creek. After a couple switch backs, the Mesa Trail turns to the East. From here, follow a climber access trail west along the North side of the creek. The trail crosses back and forth over the creek a couple of times. When you pass the Guardian (the obvious overhanging climb that blocks the right side of the canyon) turn right and follow the trail up the West side of Ridge One. Pass under the Like Heaven pinnacle and continue another 150 feet. This route starts under the obvious and exciting looking arête right off the trail. 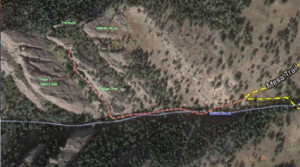 Just West of the water tower, looking West at the right fork that leads to the Mesa Trail 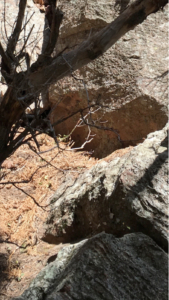 Has the route been top roped? Is there loose rock?  Is it extremely overhanging?The route has been top-roped, and the rock quality is excellent. The rock is solid, featured, and interesting.

South Side of the Sky