South Side of the Sky

Route Description:This route starts about 40 feet left (west) of the Mere Wall start, near the lowest part of the south face.  The start climbs through a very pocketed and featured face, and the line trends up and gently left.  It follows very steep terrain on good edges and crimps, past 7 bolts, with quite a few 5.11 sections.  Additionally, an independent, more difficult start (5.12a) is proposed as a variation start.  This left variation starts with climbing through a powerful, overhanging bulge start on pockets and pebbles.  From there, steep 5.11 climbing on excellent crimps (8 bolts) proceeds to a ledge where it joins the regular (easier) start. At this point, both starting lines merge to the recessed ledge area used for the Mere Wall belay at the top of that first pitch.  One could either set a natural gear anchor here and belay, or place gear and continue the lead straight up through a few bulges, following another 5 bolts to a final crux pillar.  Clip two more bolts on this final pillar (11+) and fire to the summit, where a natural gear anchor is easily set. Recommended gear includes a few cams from 0.5-inch to 2-inch. 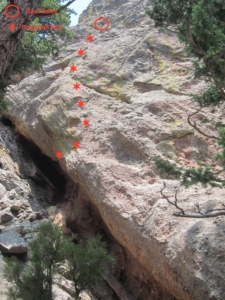 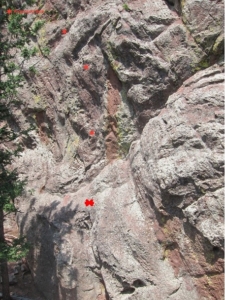 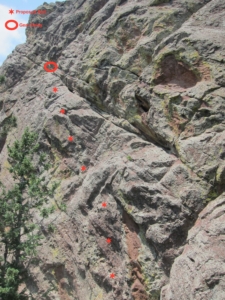 A description of existing routes on the same face of the rock formation, including the number of routes, route names, route grade, type [traditional or bolted], and approximate distance between routes (a photocopy or diagram of the existing route(s) is also required);Only one route, the Mere Wall (5.8 in guidebook but more like 5.9 R) exists on the south face. It starts on the far right side of the south face, and climbs up to and then follows a left-trending ramp for two pitches, with the first belay about 110 feet up (see photo). The Mere Wall is a high-quality and challenging gear lead for the competent leader at the grade, and no bolts will be placed where they could be clipped from that route. With careful camouflaging, we’re hoping they can’t even be seen by Mere Wall parties. The proposed route would start 40 feet left of the Mere Wall, and then cross it at the top-of-1st-pitch belay, before going straight up where Mere Wall continues traversing hard to the left (west).

Some routes exist on the north face, including Nude Figures in a Hollow Fruit (5.11a), Right Crack (5.8), and Northwest Corner (5.9), and more as one looks right to left (west to east) at the base of the north face…. However, these routes are nowhere near the south face proposal. On the west face, the routes Monodoigt (5.11c) and Thinner (5.11 R/X) are passed when walking down the west gully on the way to the south face. Further down the west side, after the point that one would cut left (east) through 4th class terrain to the base of the south face and this proposed route, is the route Quest for Balance (5.11b). 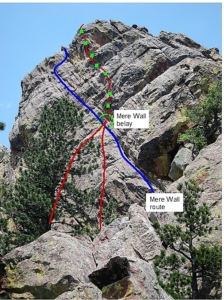 A description of the approach (include approximate distance from the designated trail system, existing “social” or undesignated trails leading to the climb and condition of the trail, and state whether there is a durable surface, such as rock. Include photographs of the approach.);There are at least three ways to approach the proposed climb on the south face; only our recommended approach on the most durable surfaces is described here: Follow the standard, well-signed Mallory Cave trail from the NCAR trailhead. Once near the Mallory Cave (approx. 1.5 miles from NCAR trailhead), stay right on the trail, continuing up to the Red Devil and The Box formations. At the final “Tee” junction near the upper west end of the south face of the Box, go left (south) on a small social trail… the trail fades out here after going 30-40 yards south at a cave-like rock… head up left into a chimney/gully, following the ridge line to the north face of the Finger… just a few yards before reaching the north face, cut right (west) past a large dead tree on the ridge, taking a ledge/ramp feature (4th class) down to a large gully running south along the west face of the Finger. Follow this gully down perhaps 50 yards, and cut hard left (east) just past the existing routes Monodoigt and Thinner, heading up the obvious rocky gully a few yards, then scrambling down 4th class terrain to the base.

This approach is approximately 4 to 5 minutes beyond the end of the standard trail leading up to the Box. From there, the approach is mostly easy 3rd and 4th class scrambling on rocks, other than a brief bit (50 yards) of steep hiking in duff, woods, scree, and talus when descending the gully that runs west of the Finger.

If different from the approach, a description of the descent, (include approximate distance from the designated trail system, existing “social” or undesignated trails, a description of the trail condition and whether there is a durable surface, such as rock. Include photographs of the descent.);The descent involves going to the webbing rappel anchor near the top of the Right Crack route, and rappelling 50 feet down to the ground on the north face. Then follow the ridge to the north, reversing the approach described above.

Has all reconnaissance work that can be reasonably done, short of placing any hardware, been done?Yes, all climbing was accessible via top rope, and all moves have been done free.

Has the route been top roped? Is there loose rock?  Is it extremely overhanging?Yes, the route has been top roped. The rock is mostly clean, though some minor cleaning of small loose rocks may be required on the upper half of the route.

Additional notesThe proposed route is very high-quality, with crisp edges and buckets scattered throughout a steep, near vertical face. Some mild overhanging portions are present, though the route was climbed clean on top rope.