Number of bolts to be placed: Total of 16 bolts
Fourteen bolts plus two anchor bolts

Proposed route, Velvet Tongue (5.13-, 30 meters), is an entirely independent line on the south face of the Devil’s Advocate Flatiron, located about 20 ft to the right of the existing bolted line, Purple Serpent. The first 20 meters of the route is beautiful vertical 5.10+ climbing with excellent hueco pockets and some technical crimping sections. The final 10 meters tackles the overhanging headwall at sustained 5.13-. The rock quality is excellent, and the climbing is interesting and unique as it ascends a tufa-like feature through the steepest part of the overhang. 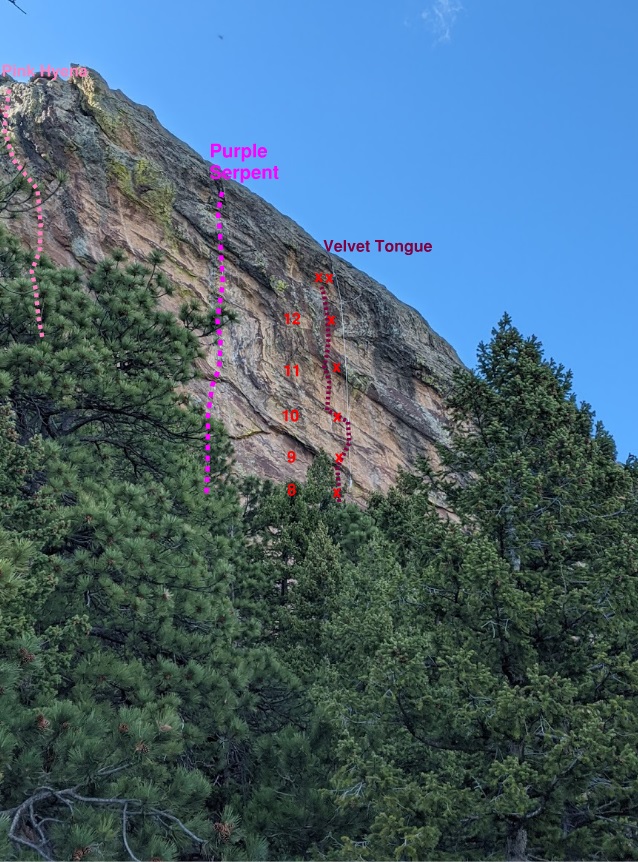 The South Face of the Devil’s Advocate has 2 existing sport routes installed, Pink Hyena AKA Tuck n’ Cover) and the Purple Serpent. The Velvet Tongue is a completely independent line ascending the section of rock to the right of Purple Serpent.

Approach is the same as for the PB Boulders, which are part of Upper Blues bouldering area. From the junction of the South Shanahan Trail and the Mesa Trail, walk approximately 100 meters south on the Mesa Trail. From here, branch off to the west across the mesa on the PB Boulders climber’s trail. The trail enters a ravine to the south of the mesa, passing the Mamoonius boulder and continuing on to the PB Boulders. Head south from the PB Boulders up a densely wooded slope on a climber’s trail to a gap in the ridge of rock that connects to Tiny Tower to the west. From the gap walk south to reach the east side of the Devil’s Advocate.

The descent from the proposed route is to lower (or rappel) from the top to the ground. Reversing the approach to return to South Shanahan Trailhead.

The base of the south face of the Devil’s Advocate consists of trees, compact pine needles, and talus, with tiered platforms formed by fallen trees / branches. The area directly below the climb is generally sloped, with flat sections available for belaying. The base of the climb has ample flat spots for belaying, which can be enhanced and slightly expanded if desired / approved.

Yes, short of placing any hardware, all reconnaissance work has been completed. The applicants climbed the existing routes at the formation and spent several days top-roping the proposed climb as well as other lines on the south face. The applicants believe the proposed route to be similar in difficulty and quality to the Purple Serpent. Exact line is well established, and the best bolt locations have been identified. The route provides no placements for removable protection.

The route has been climbed in its entirety on top rope. The applicants have top-roped the climbed and inspected the route. The rock is impeccable quality and there is very little, if any, loose rock.

This route was discussed with several other members of the climbing community, including individuals who have been involved in bolting routes on surrounding formations, as well as the Devil’s Advocate. The applicants believe that this route will be a great addition to the formation and is similar in quality and style to the other 2 existing routes.

North Side of the Sky
Scroll to top