1.  A description of existing routes on the same face of the rock formation, including the number of routes, route names, route grade, type [traditional or bolted], and approximate distance between routes (a photocopy or diagram of the existing route(s) is also required);

Seal Rock is home to some classic east face routes, as well as a couple routes on the North face (Sea of Joy 5.13a and Archaeopteryx 5.11X).  This route is on the South Face, which already has 5 bolt lines: Choose Life 5.13d, Thunder Muscle 5.14a, I am the Walrus 5.14b, The Gruffalo 5.11, and Skin Flute 5.12. There is also the trad/headpoint route Primate 5.13X.   Jade Gate 5.11 is the furthest right of the South face routes.  Jade Gate was originally climbed, in the purest style, as a gear “protected” ground-up onsight lead by Matt Samet.  The lack of protection has doomed this route to obscurity.  With Matt’s blessing this route will become a popular and welcomed addition to the Seal Rock circuit. 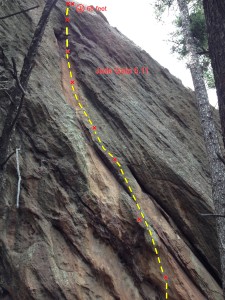 The approach is via the Harmon Cave Trail (the standard Seal Rock trail) until the turn off at the North East toe of the Seal.  Then turn left on the amazing “climber access” trail that was recently completed.  After a big switchback to the east then West the trail terminates at the South East corner of Seal Rock.  This route starts 20 feet right of Skin Flute and about 80 feet West of the start of the East Face Left route. 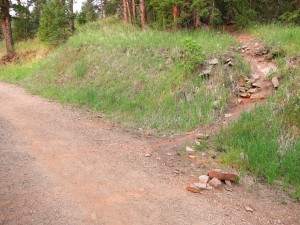 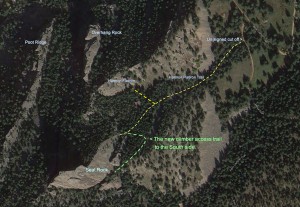 The staging area is mostly flat with some sand and rock. 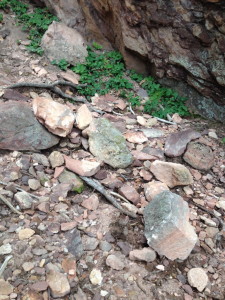 5.  Has all reconnaissance work that can be reasonably done, short of placing any hardware, been done?

Yes, the route has previously been lead on gear.  And more recently extensively top-roped.

6.  Has the route been top roped? Is there loose rock?  Is it extremely overhanging?

The route has been top roped.  There is no loose rock.

The bolts will be ½”x2.75” Powers 5 piece bolts.  The anchors will have 5/16” quicklinks with 11mm rings.  All hardware will be stainless and camouflaged. 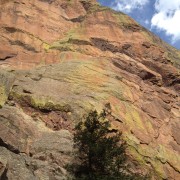 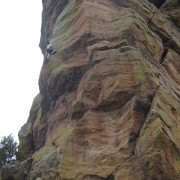 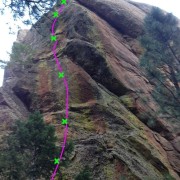